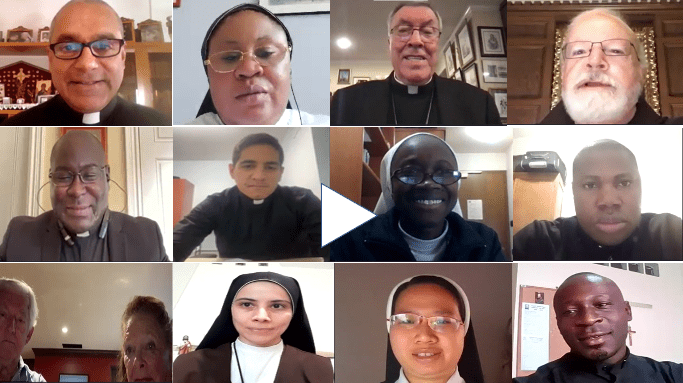 The Papal Foundation was pleased to host the fourth Saeman Scholar orientation meeting on Saturday, October 8, with 105 scholars from 40 different countries around the world attending from Rome via Zoom.

CLICK HERE to watch the blessing of the Saeman Scholars by Bishop Robert Baker and then a beautiful string of heartfelt appreciation from the Scholars themselves.

The priests and religious who participated are recipients of a total of $800,000 in funding to support their studies from The Papal Foundation’s Saint John Paul II Scholarship program, which was initiated 22 years ago by Stewards of Saint Peter John and Carol Saeman.

Monsignor Anthony Figueiredo, a great friend of the Foundation, hosted the orientation from Assisi in both Italian and English, welcoming all the students and introducing a great line-up of speakers:

“Every gift comes with a responsibility that seeks for a good return in its utilization. Each one of us is aware of the responsibility awaiting us at the end of our time in Rome when we get back to our dioceses and religious communities where we will be planting and nurturing the seeds of faith contributing to the Church’s mission of bringing all people to the knowledge of Christ and making disciples for Christ. It is our hope that having been equipped with the right instruments of work, the work of the Christ may always continue to unfold through the Church scattered in all parts of the world.”

There was a Q&A following Bishop Baker’s talk and then Foundation President Eustace Mita thanked Bishop Baker and the Saeman family for their great leadership, and then closed out the orientation with an exhortation to the Saeman Scholars to be faithful servants to the teaching of the Church.

Since its inception, the Saint John Paul II Scholarship Program has allocated more than $13 million in scholarships to 1700 students! Our heartfelt thanks to John and Carol Saeman and their entire family for their visionary leadership and financial generosity in creating this high impact program for our Church!