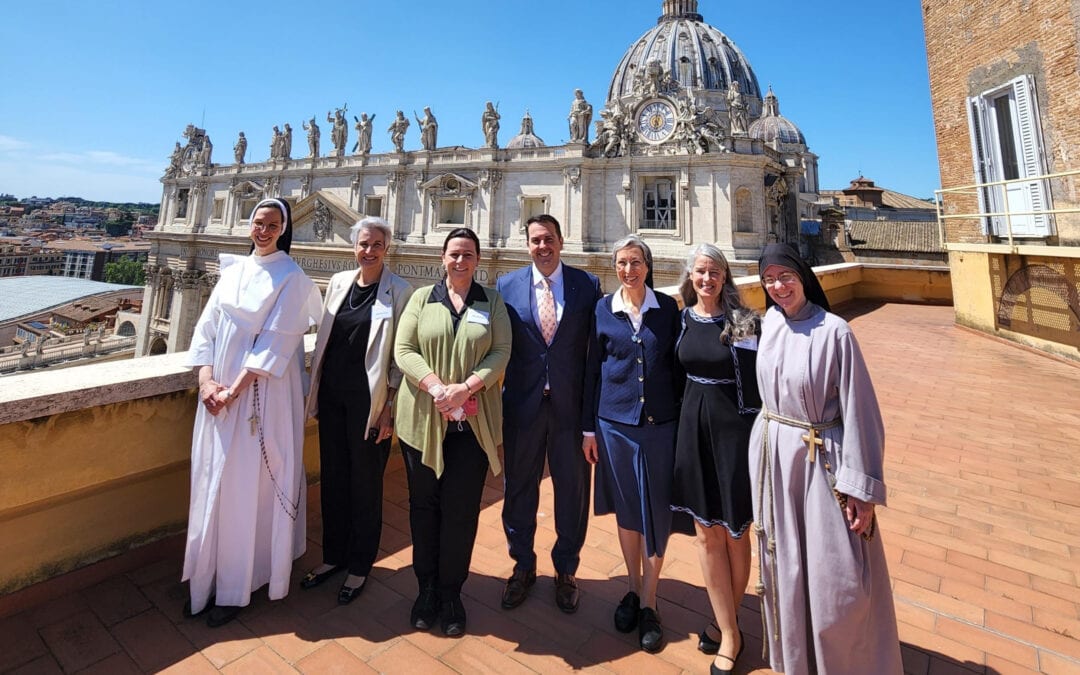 I had the privilege of traveling to Rome in September with Jane Schnatz, the Foundation’s Director of Grants Management, for a unique and first-ever opportunity for the Foundation. The trip was a direct outgrowth of a meeting that Steward Dr. Tammy Tenaglia, Ann Schnatz, Jane and I had at the Vatican during the Stewards’ pilgrimage last April.

At that meeting in April with Monsignor Luigi Roberto Cona, the Assessor of the Secretary of State, Tammy shared that the Foundation would like to strengthen its relationship with the approximately 100 Papal Nuncios that provide the grant requests from their countries to the Holy Father every year, and she asked if there might be any opportunities to accomplish that objective.

As a result, over the summer Msgr. Cona invited the Foundation to participate in a gathering of the Papal Nuncios that took place at the Vatican last week, their first gathering since 2019.

The Foundation was invited to create a presentation that would be delivered to the Nuncios by Msgr. Cona during their meeting on Thursday, September 8, and then to be available for questions from the Nuncios after the meeting.

In attendance were 91 nuncios from around the world. While we don’t know the other business that was discussed during the two and a half-hour meeting, we do know that Msgr. Cona delivered our presentation in Italian, and immediately following the meeting, nearly two dozen of the Nuncios in attendance stopped by to collect information about the Foundation and to ask Jane and me questions.

While we couldn’t speak to all of the Nuncios who stopped by our room outside the Synod Hall, all of them took Foundation materials, including our Annual Report and the list of 2022 grants. Jane and I were able to speak directly with Nuncios from Albania, Brazil, Cuba, Ecuador, Ethiopia, Iraq, Ivory Coast, South Africa and New Zealand (who is also responsible for Fiji, Tonga, Tahiti, the Marshall Islands and Guam!).

Each and every Nuncio we spoke to expressed their thanks and gratitude for the work of The Papal Foundation, with many saying how important the grants have been for the people of their countries.

The Nuncios are the Pope’s ambassadors to the world, and they are a unique and crucial aspect to the Foundation’s work, providing the counsel to the Holy Father as to which projects in each country are the most important to helping the poor and vulnerable. It was a special privilege to be available and to meet them last week, and to strengthen our relationships with those whom we share a great mission!

My great thanks to Dr. Tammy Tenaglia for her vision as Grants Committee chair and to Jane Schnatz, a tireless champion of the Foundation’s Grants process. Together with our friends and partners in the Secretary of State, this first-ever collaboration during the Nuncio meeting was a great success!