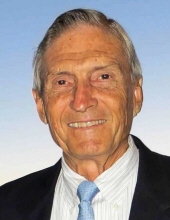 Warren Joseph Hayford, 92, died of heart failure Wednesday, May 18, at his family home in Winnetka, Illinois. He was born in Fort Sill, Oklahoma on July 21,1929 to parents Mable Moll Hayford and Warren Hayford IV.

Warren earned a degree in engineering at the United States Military Academy at West Point, Class of 1952. As an infantry first lieutenant, he earned his wings as a paratrooper. Upon leaving the Army, he joined Continental Can Company, working his way through sales and finance to become president. Following Continental, he became president of International Harvester and then president of General Tire. After years in large corporations, he founded and led several start-up companies, including Gaylord Container (IPO 1988), BWAY Packaging (IPO 1995), and Greenfield Pro Services. Warren served on several boards of public companies, including General Public Utilities and The Burlington Northern Railroad.

His strong beliefs as a devout Catholic were amplified by the core precepts of honor, duty and country, learned as a cadet and reinforced as an active alumnus of West Point. Those core principals led him to contribute his time, expertise and financial support to a wide range of non-profit organizations and serve on a number of non-profit boards.

A firm believer in the value of a good education, Warren supported the schools in the Catholic Dioceses of Cook County, Illinois and Hobe Sound, Florida. To all who knew him, he will always be remembered as a man of great character, integrity, generosity and compassion.

Warren lived a life full of purpose, deep faith, love of family and a strong work ethic. He was devoted to both the Hayford and Shaw families.

A Funeral Mass will be held at Saints Faith, Hope and Charity Catholic Church, 191 Linden St. Winnetka, Illinois on June 2 at 11:00 a.m. To view the Funeral Mass virtually a link will be inserted here.

A Memorial Mass will be held on June 11 at St. Christopher Church in Hobe Sound, Florida, at 11:00 a.m. with burial to follow beside his beloved wife Marylou at Riverside Memorial Park in Tequesta, Florida.

To send flowers to the family or plant a tree in memory of Warren, please visit our floral store.